Shakespeare fell apart that morning.  He was really just the breaking point.  We were beyond fidgeting and had moved into complete chaos.  Irritation welled up deep within.  Defeated, I finally threw my hands up and dismissed everyone. 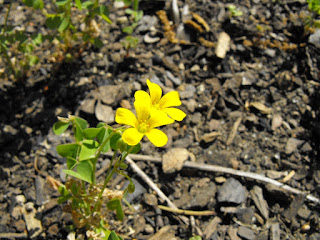 I found my way to the garden with Little Bug at my heels.  After bending too far one too many times for this growing belly, I plopped down into the soil and became purposeful in my attack on the weeds.  So many with their sweet little yellow flowers seem harmless enough, but they were taking over precious space needed for our herbs, something that would nourish and satisfy our tastes.  Hard to believe how tenacious these usurpers were.  Their roots ran deep and far across to the other side of the garden where they fathered a whole new bunch. 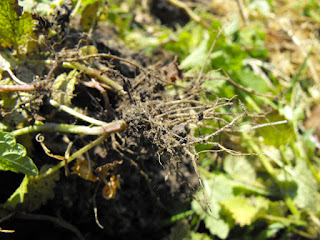 Breaking a sweat under the morning sun, I grew more determined and attentive to every weed.  So did He.  My thoughts were so intent on my children.  Their lack of interest.  Their lack of respect.  I thought the list could go on.  Until.  There it is, always an until with Him.   As I pulled and worked, He tugged hard where I insisted there was nothing but a harmless, sweet little flower.

This homeschooling idol runs deep sometimes.  I am convinced that my zeal and obsessive interest in my kids' progress is good.  Those little "flowers" only disguised discontentment, pride, a critical spirit fear, envy (Galatians 5:19-21).  The list can go on.  The weeds go on.

The solution I sought from Him was for my children to change.  The healing He gave was rooted in my own turning.  He turned the soil over revealing my need to look good, for my children to have success to feed my own pride.  His hand gently worked to pull out the old residents and plant new ones (Galatians 5:22-23).

I wish I could say Friday's weeding was enough, but this morning revealed more, most of the same kind.  But, He continues to work the soil.  Gently and with love.
written by Beth Covalt at 4:08 PM

Email ThisBlogThis!Share to TwitterShare to FacebookShare to Pinterest
Labels: through turning (repentance), with God