It was inevitable, I'm told, that the crash would come.  Hard.  Every year before the sun even began its descent on Christmas Day, she hit a wall, a meltdown.

The sugar from the two-foot-long-stocking candy would lose its sweetness.  The presents lay in a bed of wrapping paper.  The tree's skirt hidden for days made a reappearance all crumpled and sparkly.  Family had come and gone, bellies full.   Hearts fuller from laughter and tales and time together.  The whistle and cheers from a distant football game serve as a sort of lulling background music for the end of the day.

Anticipation had given birth to delight and now the crash.  A fury of emotion. Crying.  Fatigue.  Maybe a small tantrum here or there.  All ending in sleep coming on her without warning, at least to her.  My parents knew though.

I felt my own crash coming on last night.   The rare gift of snow at Christmas here in the south began to drip away and a slow meltdown seeped into my heart with the giving thanks.  I practice indirection and realize His arrival means hopes without end and what I want meets its satisfaction to the full.  His white in my heart transforming the ordinary into cause for joy. 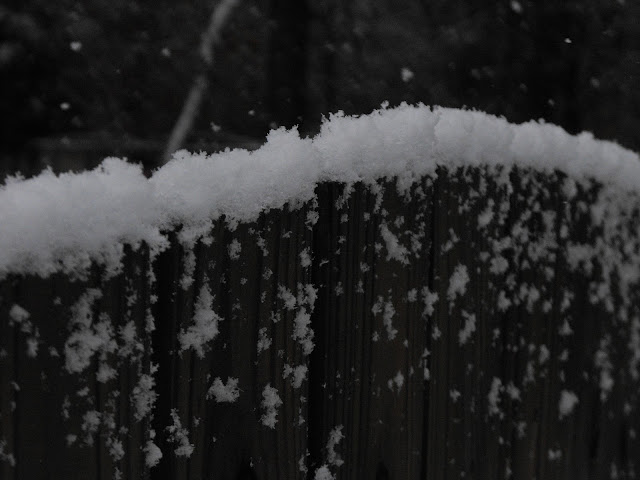 This Monday after Christmas I echo Robert Herrick's lines, whisper them softly into the sweet remains of a white blanketed gift:

Lord,'tis Thy plenty-dropping hand
That soils my land
And giv'st me, for my bushel sown,
Twice ten for one

All these, and better, Thou dost send
Me, to this end,
That I should render for my part
A thankful heart;
Which, fired with incense, I resign
As wholly Thine;
But the acceptance, that must be,
My Christ, by Thee.
"A Thanksgiving to God for His House"

Email ThisBlogThis!Share to TwitterShare to FacebookShare to Pinterest
Labels: with Gratitude